What is a JA? Junior Advisors (JA) are a cornerstone of first-year residential life at Williams College. JAs are Williams Juniors who live with first-year students and help them acclimate to college life. College President Harry Augustus Garfield first proposed the idea of an upper-class advisor/mentor living with first-year students in 1925. Garfield made clear the juniors were not to “act as proctors but that they were there simply to guide and aid the new men by precept and by advice. ” JAs serve as informal counselors and mediators, but above all JAs are friends, who just happen to know the lay of the land. 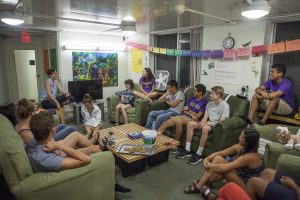 President Garfield renovated first-year living at Williams College by creating housing systems presently referred to as “entries”, or groups of around 25 first-year students who live in a section of a dorm with two Junior Advisors. From the get-go JAs were required to oversee weekly discussion groups held by each entry, facilitate interaction between different backgrounds, foster the exploration of “an interest in questions of which (first-years have) hitherto had little or no knowledge”, and serve as role models for new Williams students.

Support from the college administration has been a constant across the years for Junior Advisors. Along with the support of the colleges presidents (after all, President Garfield believed JAs to be of the highest moral character). College Deans have also always been supportive of JAs.  John Hyde, former Dean of the Freshman Class reminded JAs in 1963 that “It is your personal counsel and example which bear the most weight with the freshmen. Get to know them as quickly and as well as possible,” all the while encouraging JAs “to drop by for a chat, for it is only with your help and cooperation that I can perform my duties effectively.” The reciprocal relationship between the Deans and Junior Advisors is essential to the success of the JA system.

Dean of the College MENU

Dean of the College

Covid-19 is an ongoing concern in our region, including on campus. Safety measures are in place, and campus community members and guests are additionally advised to take personal precautions. See the college's Covid-19 website for information about campus policies. For the latest research and recommendations from the CDC, visit cdc.gov/coronavirus.