After conducting a national search, which took to heart the many thoughts and concerns shared by students and other members of the Williams community, I’m delighted to announce that the college has hired two new associate deans: April Ruiz and Chris Sewell. April and Chris will bring tremendous skills and experiences to our office and to their work with our students.

April Ruiz will oversee the First Generation Program and will act as the primary liason to Admissions, Alumni Relations, and Financial Aid. She will also serve as a resource for all students who seek personal or academic support. April was the first in her family to go to college and graduated from Yale University with a B.A. in cognitive science. She went on to earn her Ph.D. in psychology from the University of St. Andrews and later returned to Yale for a postdoctoral position.

April comes to Williams from Grace Hopper College at Yale University, where she served as college dean. In this role, she mentored hundreds of students from a range of class years, backgrounds, identities, interests, and goals. She took seriously the investments students made in their education experiences, as well as the value of strong community bonds, making her a trusted advisor for students facing moments of crisis or moments of triumph, whether these were academic, pre-professional, or otherwise.

April also served as the dean of First-Year Scholars at Yale (FSY), a summer program for incoming first-year Yale students from low-income families and under-resourced high schools, many of whom are the first in their families to attend college. 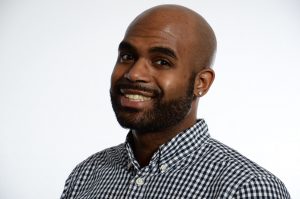 Chris Sewell will oversee projects related to students in transition and issues related to thriving. He will act as the primary liason with the Davis Center and Integrative Wellbeing Services, in addition to supporting students more generally. A fellow Eph, Chris earned his B.A. in American studies and history. Upon graduating from Williams, he completed his M.S.Ed. from the University of Pennsylvania and M.A. in Afro-American studies from the University of California-Los Angeles. Most recently he earned his Ed.D. in educational leadership and policy from Vanderbilt University.

Chris returns to Williams from the New York City-based General Assembly, where he served as an independent researcher and senior instructional manager. His scholarship focuses on studying the experiences of gifted students of color and how schooling and policies around gifted and talented education affect their long-term experiences. In addition, he looks at the ways in which LGBTQ+ gifted students negotiate their academic, racial, and sexual identities.

Prior to his research, Chris was a Teach For America Corps member in Philadelphia, where he taught 8th grade English. Afterward, he continued to teach or serve as an instructional leader at several charter schools in Los Angeles, New York City, and Atlanta.

In accepting our positions at Williams, April and Chris each bring to the college a deep understanding of the needs of today’s students. They look forward to collaborating with and learning from colleagues and students to continue and build on the positive work at the college that has centered on the values of inclusion and equity.

I want to thank the members of both search committees—Brian Benitez ’18, Meg Bossong, Rachel Bukanc, Liz Creighton, Joe Cruz, Paul Gitterman, Theo Kwapong ’20, Shawna Patterson-Stephens, G.L .Wallace, and Sharifa Wright—for their dedication and contributions to these highly successful searches. In addition, I would like to extend a special thanks to the students, faculty, and staff who participated in the effort, and for their valuable insights along the way.

Marlene Sandstrom, Dean of the College

Dean of the College

In response to COVID-19, activities and programs at Williams are canceled or postponed until further notice. See information and updates on Williams COVID-19 response.